The Evolution of Indy 500 Qualifying 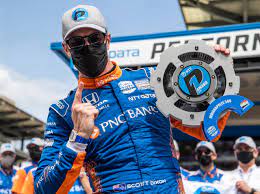 The Indianapolis Motor Speedway announced this week some significant changes to the 500 qualifying procedure to take effect during next month’s 106th Running of the Greatest Spectacle in Racing.

As with any change, reactions are mixed amongst the fans ranging from a solid “thumbs up” from some fans to the classic “I miss the old days” from others. We will get into the latest changes to the format later in the article. I thought, however, that it might be a good idea to start at the beginning and examine the procedures and how they have changed and evolved over the years.

For the inaugural 500 mile race, held in 1911, the car’s numbers and grid positions were determined by the timing of entry forms and fees received at the Speedway. Mind you, if there happened to be ten in the mail box on the same day, I have no idea if they went through the trouble to arrange them by the time of the postmark, or if they just stacked them up and wrote them down in the order they opened them. It is interesting to ponder, although there is not a living person still around that may have witnessed this procedure. 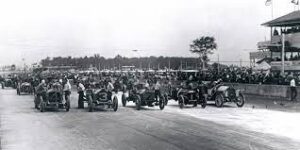 With the entries filed, the Speedway still needed an assurance that the car would be fast enough, so a very simple qualifying procedure was introduced. With a flying start, a driver had to show that he could run the car at 75mph. Cars were timed over a quarter-mile section of the front stretch that they had to complete in under 12 seconds to make the show. There were, in fact, two drivers, Rupert Jeffkins and Louis Edmonds, that failed to get their cars up to speed, and another three that did not attempt a qualifying run. Of the 45 entries, 40 cars started the race.

This procedure was utilized once again in 1912, but a change was in store for 1913. The 75 mph rule stayed the same, however the grid positions were determined by a blind draw from a hat.

In 1914 the qualifications were replaced by a three-day process called Elimination Trials. There were 45 cars entered, but only the fastest 30 would be able to start the race. Cars were allowed multiple attempts over the three days to set the fastest speed over the course of one lap. The driver would run a few warm-up laps and then signal that he was ready to begin his lap. The three days of Trials occurred on the three days prior to the race.

With Frenchman Georges Boillot running a lap at 99.86 mph to set pole, this was realistically the purest of all the qualifying procedures ever used. All the cars were lined up from top to bottom according to speed, regardless of which day they set their time.

When racing resumed in 1919, the 500 mile race distance was reestablished and there was another significant change to qualifying. Retaining the one timed lap, the plan was to hold all of the Elimination Trials on Tuesday before the race. However, gusty winds and rain stretched the procedure to three days. The curious decision was made that second day qualified cars would line up behind the day one cars, and the day three cars behind day two. With this change, we wouldn’t see another field lined up front to back by speed again until 1969, when weather compressed qualifying into one day.

In 1920, the one lap run was abandoned in favor of the four lap average. Qualifying was also expanded to five days prior to the race. Over the next several years the number of qualifying days bounced around from as few as four to as many as seven depending on weather, number of entries and other factors. 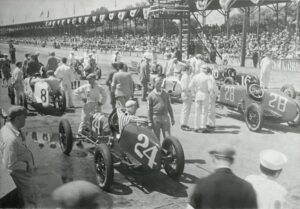 In 1927 the field was capped at 33 cars. One year later, in 1928, the Speedway found themselves struggling to fill the field as several drivers had encountered troubles during the trials. With 31 cars qualified, they allowed Jimmy Hill and Wilbur Shaw to make a qualifying attempt on the morning of the race. Shaw put his car into the field, but Hill declined to make an attempt. To compound things, Buddy Marr, Dutch Bauman and L.L. Corum crashed in the final practice and withdrew from the race leaving 29 cars to start.

Speedway president, Eddie Rickenbacher dropped the 33 car cap in 1930 in the hopes of luring passenger car manufacturers back to the Speedway, although the Time Trials remained unchanged. The 500 attracted larger fields topping out at 42 cars in 1933. The larger field created new problems as the 1933 race saw five competitors lose their lives. The 33 car cap returned in 1934.

The Speedway closed following the attack on Pearl Harbor in the fall of 1941 and would lay dormant until Tony Hulman purchased the property in 1945. The 500 rose from the dead in 1946 with a new setup for qualifying. The plan was to utilize the two weekends preceding the race for time trials, rather than the weekdays leading up to the race in order to boost attendance for qualifying runs. Unfortunately, Mother Nature rained out the first weekend and the first two days were held on Monday and Wednesday with the second weekend and that Monday being used to fill the field.

In 1947, the two weekends were utilized, however the following Wednesday was added to fill the field. A dispute between the American Society of Professional Auto Racing  and the AAA Contest board saw a number of drivers boycott the race over the purse size. Even with the extra day, the field still came up short with 30 cars starting.

In 1950 and 1951, qualifying was expanded to six days utilizing the three weekends preceding the race. Keep in mind here that the race at this time was not necessarily held on a weekend. Race day was always May 30, unless that fell on a Sunday, in which case it would be held on the 31st. Beginning in 1952 the procedure reverted to four days over two weekends.

For the next two decades qualifying remained unchanged utilizing the Pole Day-Time Trials / Time Trials-Bump Day format on two consecutive weekends. In 1971, the U.S.A. passed the Uniform Holiday Act which moved Memorial day from a fixed date of May 30 to the last Monday in May. The race would now be held on the Saturday of Memorial Day weekend. In essence, this standardized the number of days between Bump Day and race day. In 1973, the race moved to Monday (although that particular race was rained out until Wednesday) and in 1974 the Speedway broke a long-standing rule and began holding the race on Sunday. The Sunday of Memorial Day weekend race date holds to this day.

1971 would also see another tweak in the rules that would allow the awarding of the pole to stretch beyond pole day if the procedures were affected by weather. This was intended to give every driver at least one shot at a Pole run. Prior to this, Pole was set on Qualifying Day One regardless if everyone got a run in the books or not. 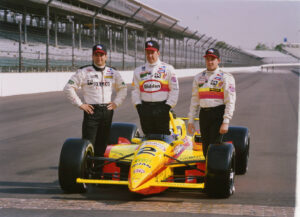 It would be 1996 when the Speedway would see another shake-up in qualifying. Speedway president Tony George had just founded the Indy Racing League as a rival to the CART series. He guaranteed an Indy 500 starting position the the top 25 in IRL points provided that their attempt was over a minimum speed, which was set at 220mph. The only bumping that could occur would be among the ‘at-large” entries with only eight spots available. The newly christened 25/8 rule was quite controversial and it led to a boycott from the CART teams and drivers.

In 1998 the 25/8 rule was gone, as was the first weekend of time trials. Qualifying was now a two-day affair with Pole Day and Bump Day being held on the weekend before the race. This would hold true until 2001 when a third day was added to the procedure. Pole Day and Time trials would be two weeks before the race, with Bump Day now being held on the Sunday prior to race day.

The three day format was used through 2004 and the fourth day was added back to the schedule in 2005, returning to the traditional procedure.

The 2010 event would see a major overhaul of qualifying procedure introducing the “Fast Nine Shootout”. Using a two-day format, all cars were allowed up to three attempts with the 24 fastest times being locked into the grid. The session would run from 11am – 4pm, after which the fastest nine cars would advance to the second session. These nine cars were allowed up to two attempts apiece with the fastest one being awarded Pole position. On Sunday, the remaining cars outside of the top 24 would set times to fill the final three rows and bumping would occur. Another significant change saw points being awarded towards the season Championship for qualifying.

In 2014 another tweak of the rules saw the awarding of pole position move from Saturday to Sunday. All cars would make an attempt on Saturday with the times for positions 1-30 earning a spot on the grid. Cars in positions 31-33 were not locked in and susceptible to being bumped. This was, however, a moot point as there were only 33 entries in 2014. On Sunday, all the cars would requalify to determine grid position. Spots 10-33 were set in the early session, and during the afternoon session the Fast Nine Shootout determined the pole. 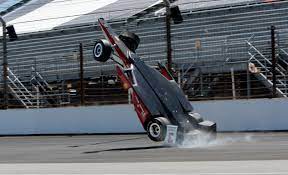 2015 saw a unique set of circumstances necessitate last minute rule changes. This was the first year with the manufacturer aero kits. Practice was marred with some serious incidents seeing some cars get airborne and upside down. Helio Castroneves, Josef Newgarden and Pippa Mann were all involved in rather ominous looking crashes. First round qualifying was rained out, and during the morning practice session on Sunday, we saw yet another car find itself upside-down, this time being Ed Carpenter.

IndyCar then held a lengthy meeting behind closed doors with its competitors to discuss the best course of action. The decision was made to eliminate the additional boost allowed for qualifying, limit each driver to one run, scrap the fast nine and not award points. In 2016 we reverted back to the 2014 procedure and continued through 2018.

Changes introduced in 2019 eliminated the process of every car in the field needing to requalify on day two. Now, positions 10-30 would be locked in on day one with day two seeing the Fast Nine Shootout to determine positions for the first three rows and the Last Row Shootout to determine positions 31-33 and bumping would occur. With the shortened proceedings on day two, an additional post-qualifying practice session was added to Sunday’s schedule.

This brings us to the latest change that will debut this year. Essentially, positions 13-30 will be locked in on day one. If more than 33 cars are entered Last Chance Qualifying will be held on Sunday to set the final row. Following this the fastest 12 cars will be guaranteed at least one attempt. Positions 7-12 will then be locked in as the top six cars will advance to the Firestone Fast Six session to determine the pole.

This is not wildly different than the knockout qualifying we currently use on street and road circuits and it adds one level between the initial attempt and the pole run. Will it have a large effect on the outcome? That remains to be seen. Qualifying for the 106th Running of the Indianapolis 500 will be held May 21-22, 2022 and will be broadcast on Peacock.