Spec Racing and the Loss of Innovation in IndyCar

Does anyone remember the Indy 500 before there was spec racing?  It’s been 25 years since the debut of the Indy Racing League. Tony George’s brainchild ended innovation as we know it at the Indianapolis Motor Speedway starting in 1997.

Innovation was king at Indy since the first “500” in 1911.  It was Ray Harroun who fixed a mirror on his Marmon Wasp so that he could save weight by racing the car without a riding mechanic like those found in the rest of the field that day. 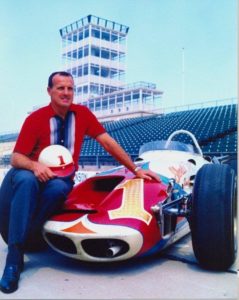 Harry Miller was the first real car designer to show up at the Speedway with a rear engine car in the late 1930’s. Jack Brabham brought his rear engine Cooper Climax to Indy in 1961 and a revolution was born.  1964 was the last win by a front engine car when A.J. Foyt claimed his second victory. By 1965, 27 of the races 33 starters were rear engine.

Had spec racing existed at Indianapolis in the 1960’s we may never had gotten those rear engine cars.  Spec racing would have killed the sidecar idea brought to Indy by Smokey Yunick in 1964.  True it failed to make the race, but it was by far one of the most original ideas ever brought to the hallowed speedway.

Spec cars would have prevented us from seeing Andy Granatelli’s famous “turbine” race cars.  Yes, rules hampered the development of the cars, but the “turbine” from 1967 and 1968 are still some of the most beloved race cars to ever grace the 33-car field.  They are often part various exhibits at the famed Indianapolis Motor Speedway Hall of Fame Museum.  They are probably the most famous cars to never win the “500”.  Save for the loud and powerful Novi.

Allowing only spec cars may have prevented us race fans from seeing wings come into play or at least a delay.  From the beautiful McLaren’s, and Eagles of the 1970’s to the Chaparrel, Wildcat, Penske’s, Lola’s, Marches and Reynard’s of the 1980’s and 1990’s.

Also sacrificed with spec racing are the speed records at Indianapolis.  In 1996, the last year before the spec racers took over the field, Arie Luyendyk blistered the 2-½ mile oval.  It’s a record that still stands some 25 years later.  He set a one lap record of 237.498 mph and a four-lap record of 236.986 mph.  Who knows if that record will ever fall?

Don’t get me wrong.  Spec racing has produced some of the best races ever seen at Indianapolis.  But what determines a great race? Is it constant passing and photo finishes or both?  I get it I really do. But is that what dictates what a good race is?  Personally, I don’t think so.

I’ve always enjoyed a good spanking at the speedway. In fact, 1994 comes to mind.  Because I knew then I’d never see anything like it at Indy again.  Let’s think about this.  With social media, would Roger Penske really be able to build, develop and test an Indy-only-motor in secret like he did back then?  With spec racing we’d never had the Mercedes 209.

1982 still stands out  as one of the greatest races ever to be held at Indianapolis.  From the crash at the drop of the green flag to the closest finish in Indy history at that time. Rick Mears hunting down and cutting into the lead and almost passing Gordon Johncock is one of the most dramatic events ever played out at the Brickyard.

He became a car owner in 1990 with Gary Bettenhausen and Jim Crawford.  His cars (Lola’s) were always powered by the mighty Buick V-6 motor.  The engine produced a lot of horsepower, but were very unreliable.  In fact, the Buick didn’t complete a full 500 miles at Indy until 1992 with Al Unser Sr. at the wheel of a Menard owned racer.  He finished third.  Buick would pull their support of the motor program that year. 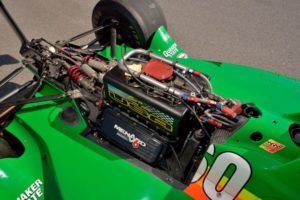 Menard would purchase and pick up the R & D of the V-6 for an Indy only assault in 1993.  He desperately wanted to win Indianapolis. The Menard V-6 that showed up every May showed promise and was often at the top of the speed charts.  When Menard showed up at Indianapolis in 1995, he did so with a Lola chassis that was designed specifically for his Menard motor.

Menard’s car would dominate the early portion of that event with rookie Tony Stewart.  Again, the motor experienced issues.  His cars would grab top 5 finishes, but none would make that final left turn into victory lane.

All of the innovation was gone in the blink of an eye come 1997.  Yes, there has been some safety innovations since the first IRL spec car was raced in 1997.  Costs have been cut dramatically which was absolutely necessary.

In the rival CART series innovation continued.  There were some beautiful creations being raced.  In 1997 alone there were Lola’s, Reynards, Swift and Eagle chassis.  However, by 2008 CART, then the Champcar World Series and also a spec series, was absorbed by the Indy Racing League.  Both monikers were dropped in favor of what it should be called, The Indycar Series.

There will always be arguing, bickering and debate, but there was nothing like going to Indianapolis every year to see and witness the innovation being produced.  Will it ever happen again?  I don’t think so, but we have our memories, pictures, books and YouTube to take us back to that wonderful era.