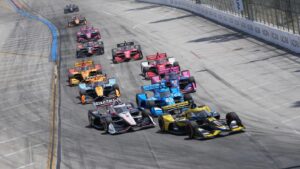 With a respectable fourth place in St. Petersburg and a less than stellar run to 12th at Texas, Long Beach represented the perfect opportunity for Herta to mount a serious run for the title. The series visited Long Beach just eight months ago when Colton Herta absolutely decimated the competition en route to a convincing victory.

The Andretti Autosport team, which admittedly has been struggling a bit as of late, came off of a very successful test at Barber and unloaded with some fast cars in Long Beach. Herta, along with teammates Romain Grosjean and Alexander Rossi, found themselves near the top of the timing charts through practice, culminating with Herta breaking the track record and earning the pole position.

Less than 24 hours later, Herta was left with a damaged car, a 23rd place classification and mired down in 11th in the points standings. After handily leading the early portions of the race, then losing the lead through pit stop cycles, Herta made a crucial mistake while trying to make up ground. He overshot his braking point entering turn nine, locked the tires and ended his day in the wall.

“It’s just a stupid mistake, like we were definitely in that thing.” said Herta. “We were running good there in third and keeping up with Alex and Josef, so it’s unfortunate. I feel really bad.”

Here’s the thing, though. There are days that Colton Herta is so much “on his game” that nobody can beat him. Nobody, except..well, Colton Herta.

We’ve seen this before, most noticeably in Nashville this past summer. Herta was nearly unbeatable while leading the race. When roles reversed and Herta found himself chasing the leader, a mistake cost him the race leaving him with a DNF. If you recall, when Marcus Ericsson inherited the lead at Nashville, he was driving with a damaged car. Had Herta exercised a little patience, rather than displaying a sense of urgency to get back to the front, the race likely would have come back to him. The world will never know.

Now, don’t get me wrong. I’m a big fan of Colton Herta. The things he can do in a race car are amazing. However, the landscape of racing history is littered with guys that had ‘tremendous potential” and ended up with very little to show for it after retirement. 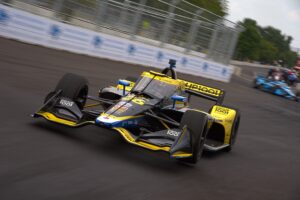 Herta has entered the past two seasons as a solid championship favorite, but has yet to live up to that. A somewhat consistent 2020 season yielded third in the championship, but it was a distant third: a full 100 points behind second place. 2021 saw three wins with two additional podiums. 2021 also saw a number of finishes outside of the top 15 and a fifth-place eventual finish in the standings which never really put him into the conversation for the title.

With his driving prowess, its easy to forget how young Colton Herta still is. My gosh, I own concert t-shirts I still wear that are older than Herta. Factor in the distractions of F1 speculation and the endless questions being thrown his way, and its easy to see how this can drain his focus.

Certainly, some of these shortcomings fall on the team when it comes to strategy calls and mechanical failures, but Herta needs to take a look at the things he can control. Looking back at some of the multiple champions in INDYCAR, like Scott Dixon or Dario Franchitti, you’ll notice that they both won a lot of races. However, it’s equally important to look at the races that they didn’t win, but still brought the car home for a decent finish and remained in the thick of the battle.

This is the next step for Colton Herta. The thing that separates true champions from occasional race winners is the ability to look at the season as a whole rather than plotting strategy one weekend at a time. Under the watchful eyes of Michael Andretti and Bryan Herta, the growth potential for a natural talent like Colton Herta is there for the taking.

Barber Motorsports Park is next up on the schedule, followed by the Month of May, where double-points in the 500 can really boost a championship run.