Heir to the Throne? McLaughlin on Pace to Eclipse Penske Record

When Josef Newgarden passed Scott McLaughlin on the final lap of the Xpel 375 IndyCar race at Texas motor Speedway, he reached another milestone for Team Penske. Newgarden’s victory was the 600th win for Team Penske across all of the disciplines they have raced in.

Team Penske marketing and social media were all over celebrating this accomplishment and shared out many stats of how, when, and by whom these 600 wins came from. The team even released a list of their top-ten winnngest drivers. While it wasn’t a surprise to those that follow Australian Supercar, suffice to say that several American race fans were surprised to see McLaughin as number three on that graphic. 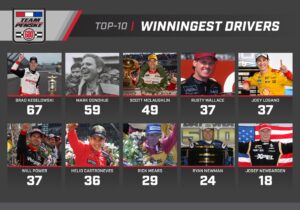 Most of this list makes perfect sense. As the longest-tenured Team Penske driver (22 years), NASCAR’s Brad Keselowski is firmly on top. Participation in both Xfinity and Cup racing, combined with the fact that he is damned good driver that gets the job done have notched him 67 wins in a Penske car. Brad now has moved on from Team Penske, purchasing an ownership stake in the newly-renamed Roush /Fenway/Keselowski Racing team. Any wins he adds won’t be Penske wins.

Mark Donohue drove some of the most dominant cars in USRRC, Trans-Am and Can-Am racking up wins for the Captain in the 60s and 70s. Among other accomplishments, he won the Indy 500 in 1972 and piloted the Porsche 917-30, a car so dominant that it is often credited with killing the Can-Am Series. Unfortunately, Donohue’s tragic death in 1975 has his win total frozen forever.

Next on the list is Scott McLaughlin. This is the one that caught many by surprise, myself included. Mind you, I was very aware of his stellar record as a multiple champion in Australian Supercar. However, not being a close follower, I didn’t realize just how dense their schedule is. Surprised or not, the numbers don’t lie. The next time Scott McLaughlin takes the checkers, it will be his 50th win in a Team Penske car. 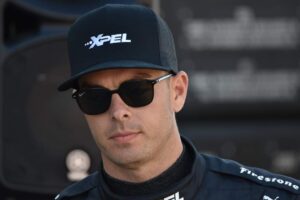 Scott is just getting started in IndyCar. He’s relatively young at 28 years old. He’s proven that he has what it takes to win in the series and, lest we forget, he drives for Team Penske. How realistic is it for him to take that top spot from Keselowski?

McLaughlin needs 19 wins to eclipse the record. Will Power, his current teammate, joined team Penske in 2009 also at the age of 28. He recorded his 19th Penske win during his 6th season with the team in 2014. Josef Newgarden joined Team Penske in 2017. Last week’s win at Texas was his 18th for Penske, also in his sixth season. Castroneves took a bit longer, crossing the 19 win mark in his 8th season with Team Penske.

This shows that the climb to the top for McLaughlin is not out of the question. Perhaps, sometime between 2026 and 2028 Penske may have a new all-time leader.