Fifty-two years ago a boy was born to a NASCAR family. His name was David but his fans know him as Davey Allison.

And such started the auspicious yet ultimately doomed life of one of NASCAR’s legacy drivers. 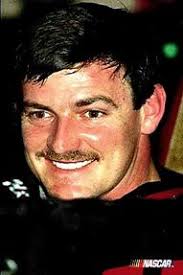 Davey carried the Allison name but was gifted no favors by it. He worked hard, honed his craft behind the wheel, and earned every victory he accumulated.

At the time of his enormous success and popularity in NASCAR I was most assuredly not a fan of Davey Allison’s. I was, after all, a Dale Earnhardt fan through and through and this guy in the black No. 28 Texaco Havoline Robert Yates Ford was often strong competition to my driver.

But, try as I might, I couldn’t dislike the guy. Davey Allison was young, seemingly happily married with young children, and had a healthy dose of self-confidence that made me want to root for him rather than against.

Davey ran his first race on April 22, 1979 at Birmingham International Raceway and won five races that year, the first victory coming on his sixth start.

By 1983 Davey began racing in the ARCA series and took the trophy twice that year at his home track, Talladega Superspeedway. The following year Davey was named the ARCA Rookie of the Year. 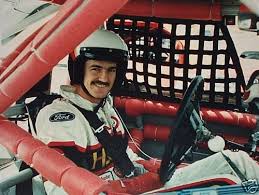 Davey was asked to sit in Hoss Ellington’s Cup car in 1985 to drive in the Talladega 500. Davey qualified in the 22nd position and brought the car home in 10th in his first Cup start. In 1986 he was asked to fill in for Neil Bonnett, a fellow Alabama Gang member, in Junior Johnson’s No. 12 car.

In 1987, sitting in his own ride with Ranier-Lundy driving the No. 28 Texas Havoline car, Davey won the outside poll at the Daytona 500. Trouble in the pits that day squashed any hopes for a decent finish, but Davey was on the path to greatness.

On May 3, 1987 Davey Allison passed Dale Earnhardt for the win at Talladega winning at the superspeedway as a rookie in the Cup series. He followed the win at Talladega with one at Dover a month later. His two wins, nine top-fives, 10 top-10 finishes, and five poles sewed up Rookie of the Year honors for Davey.

Vying for the win against his father Davey finished second to Bobby at the 1988 Daytona 500. This was a terrifying and painful year for Davey on and off the track. His father Bobby had suffered terrible injuries at Pocono in June that left him holding on for life and consequently ended his racing career. 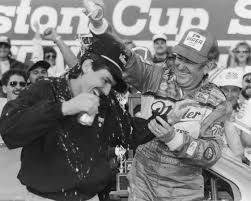 Davey’s team was suffering blown engines and financial stresses until Robert Yates came aboard as crew chief. Ranier eventually sold the team to Yates that fall.

The years of 1989 and 1990 were decent but not spectacular. Even a brief stint with “Suitcase” Jake Elder in 1990 did little to revitalize a team in desperate need of something tangible.

Yates, seeing the dissonance in his team, especially between Elder and Davey, let the veteran crew chief go and hired Larry McReynolds.

McReynolds recalled “From the first practice we had together I knew we had chemistry. This was before cell phones and the like so I had to wait until lunch break to call my wife and tell her that I had finally found my driver! I knew we’d do well together.” 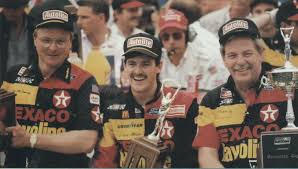 And they did. Davey and McReynolds won both The Winston All-Star Race and the Coca Cola 600 in 1991. McReynolds helped him earn a win at Sears Point and Michigan. By mid-season, with a third at the July event in Daytona, Davey was up to fifth in the points.

A combination of wins and disappointments followed which led to the team finishing third in the points.

I vividly recall watching the championship awards show from the Waldorf Astoria in New York City that year. My driver Dale Earnhardt had won again. While giving his speech as the third place driver Davey stood where Earnhardt could see him and told him that he would be sitting at that lead table the following year. Earnhardt smiled knowingly.

Many times I’ve written about the 1992 NASCAR Winston Cup season and how it solidified my fandom as a race fan, not just a fan of Dale Earnhardt. Davey Allison had much to do with that.

Davey started the 1992 season winning the Daytona 500. He also repeated as winner at the All-Star race, albeit he had to celebrate from his hospital bed due to the accident between he and Kyle Petty trying to get to the checkered flag.

Marred by accidents, beaten up yet still determined, Davey was on a mission to win the championship. He entered the Atlanta race needing only a fifth place or better to win the Cup. But, alas, fate and Ernie Irvan took Davey out of contention during that last race of the season.

Davey must have believed he had many more opportunities to win a Cup or even several.

Sadly, Davey lost his life as a result of a helicopter accident in which he was the pilot on July 13, 1993.

“I not only lost my driver but I lost my best friend,” McReynolds recalls, still reeling with emotion nearly 20 years after.

“That No.28 was my favorite car since 1960. Davey was the perfect man to bring the No. 28 back into the limelight after Fred Lorenzen retired.” 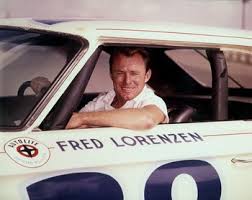 “My dad’s business had a parts truck we took to the races selling parts and tires. The name of the business was Lovett’s Speed Shop. Back then all the tracks had shut down but those running the NDRA races and they asked if he would follow them around. Mind you we went to a bunch of tracks for the first time. Well they decided their last race was going to be on asphalt to be held at Jefferson Speedway in Jefferson, GA. We were asked to be there for the late model race, not knowing the late models were the Sat. show and the World Crown 300 was the Sunday show. Back then a lot of the Winston Cup drivers ran that race. With being able to be in the pits I got to meet a lot of these drivers including Davey Allison. All the big name guys came in with haulers and enclosed trailers, the only two guys whose car came in on an open trailer with a pickup truck was Davey Allison and Kyle Petty.
Davey’s car was a black No. 28 with no sponsors so I decided to go talk to this fellow and see who he was, obviously an underdog with no sponsors. I went over to his truck and he had wife with him. I asked who he was and he told me his name and I told him mine and we talked for about for about an hour on his truck. I told him I needed to go back to our truck and check in with Pops. He told me anytime I had free time and wanted to chit-chat to come over and talk to him which I did about three more times before the weekend was over. Later it was hard to believe the driver he turned out to be. What saddened me the most was when I heard he had passed. I flashback to that weekend a lot here and there.”

“I was at Richmond International Raceway and saw Davey win in 1993. I remember sitting in on the front stretch about half way up and it was me, my parents, two of their friends, and my brother. We did a race pool for a few bucks; I ended up with Kyle Petty. My brother won the pool as he ended up with Davey and he became a fan of his that day ever since winning the race. I myself was and still am a Dale Sr. fan to this day, but was saddened to see Davey go away from us so young, he was a great driver! I miss him and Kulwicki both, they just left too soon.”

“I’m proud to have had the opportunity in my life to have actually seen him in person at different tracks, get his autograph and shake the hand of in my opinion one of the greatest drivers our sport has ever seen. When I was in high school I worked at a Texaco Express Oil Change just because the uniforms looked like Davey’s pit crew and I proudly wore that Texaco uniform because they were my favorite driver’s sponsor…. and that’s a true story from a Davey Allison fan that still thinks from time to time about a race car driver that even though he was small in stature but behind the wheel of a race car to me was bigger and had more raw talent and determination and heart as any driver that’s ever sit behind the wheel of a race car.”

To find out more about Jason Neely please visit his website www.jmnfoundation22.org and FB page www.facebook.com/jmnfrace2cure22.

There are no words 20 years later that quell the pain and ache of losing one’s favorite driver, one’s hero. Remembering Davey Allison for the good he did on – and off – the track allows us to keep his memory alive.

Cheers to Davey Allison and the bright star he was. He made NASCAR a great sport to watch and he helped make me a well-rounded race fan. Thank you, Davey.