Formula One in the USA: A Brief History 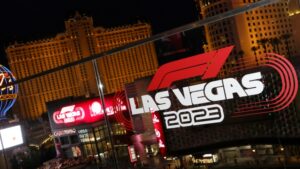 Fueled by their American ownership group, Liberty Media, the success of Netfilx’s “Drive to Survive” television program, and record attendance numbers coming out of COTA last year, Formula One is intent on increasing its footprint in the United States. The series recently announced a Grand Prix in Las Vegas, slated for 2023, that was signed, sealed and approved before they have even held their ambitious second Grand Prix in the States, scheduled for next month in Miami.

The United States has hosted three Grands Prix in a single season once before, back in 1982, but also has seen stretches as long as eight years without F1 competing on US soil.

The history of Formula One in the States is varied and spotty, as the sport has never really taken a strong foothold or truly captured the imagination of the mainstream fans as it has abroad. That is, of course, before “Drive to Survive.”

With that being said, let’s take a look back at the past history of Formula One in the States.

When the modern F1 championship was instituted in 1950, the Indianapolis 500 was included in the calendar. Because the race was not run to FIA rules, very few of the F1 drivers or teams would enter, and it’s problematic to call the 500 a Grand Prix although it did pay points.

The first true Formula One race in the US was held at Sebring, FL in 1959. Staged in December, the event was the season-ender and New Zealand’s Bruce McLaren took the victory. Seven American drivers were on the grid, including Roger Ward and Phil Hill. The highest finishing American driver would be Harry Blanchard, who limped his Porsche home in seventh place, four laps off of the pace. The event itself was not successful from a financial standpoint, and the original promoters washed their hands of it after the prize money checks bounced.

The event was moved to Riverside, CA the following season where it ran just once, but again, did not prove to be successful.

In 1961, Cameron Argetsinger, owner of the Watkins Glen circuit in upstate New York, offered to host the USGP and his bid was accepted. This began a relationship between Formula One and the Glen that would last for twenty years.

The 1961 season had seen Phil Hill become the first American F1 Champion, having clinched the title in Monza, the round prior to Watkins Glen. Hill’s teammate, Wolfgang Von Tripps, was tragically killed during that same race, and the Ferrari team declined to enter Watkins Glen, denying the American fans the chance to see their newly crowned champion race.

The Grand Prix at Watkins Glen grew to become a tremendous success, attracting massive weekend crowds over the next several seasons. The event was also a favorite with the drivers, and the season-ending party at the nearby Seneca Lodge became a popular event.

In 1971, the track was completely overhauled and the section known as ‘the boot’ was added. This added a tricky series of uphill and downhill corners making for some spectacular viewing. It also added an element of danger as the speeds increased dramatically during the 1970s. Both Francois Cevert and Helmuth Koinigg lost their lives in 1973 and 1974 respectively. 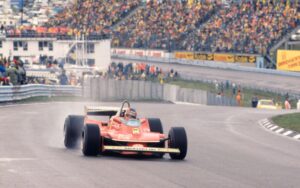 As the 1970’s came to a close, the rising costs of staging a Grand Prix, combined with the expenses associated with safety improvements added in 1978 put the track in financial peril. At this time, FISA was still demanding further upgrades to the facility, but with no money in the coffers, loans were denied and the race was dropped.

Alan Jones stormed through the field after going off-course on the opening lap to take an exciting win in the final Grand Prix at the Glen in 1980.

Over on the West Coast, the Ontario Motor Speedway was looking to hold a Formula One race of its own. In 1971, the facility staged the Questor Grand Prix. This was a non-championship exhibition race that pitted Formula One drivers against USAC IndyCar drivers. While it did not lead to a successful bid to host a USGP, it remains an interesting footnote in racing history.

In 1974, promoter Christopher Pook had envisioned a street race along the waterfront in Long Beach, California. After staging a successful F5000 event, he was given the green light to host Formula One in 1976. The Long Beach Grand Prix, also known as the US Grand Prix West, debuted with Clay Regazzoni taking the win for Ferrari.

It was the following season’s race, in 1977, that really cemented Long Beach as a viable event. American driver Mario Andretti thrilled the crowd dueling with Niki Lauda and Jody Schecker to grab the win. In doing so, he became the first and only American driver to win an F1 race on American soil.

The race at Long Beach proved to be a success, but again, the rising costs of Formula One reared their ugly head. Without missing a beat, the promoters dropped Formula One after 1983 in favor of hosting the CART series. The race today remains on the schedule for the NTT IndyCar Series and is the longest running street race in North America.

With Watkins Glen out of the picture for 1981, F1 looked to the glitz and glamour of Las Vegas to end their season. A rather flat and tight course was laid out in the parking lots of Caesar’s Palace. The event produced a paltry crowd, and the desert heat did not help.

The circuit ran counter-clockwise, rather than clockwise like many F-1 circuits. This proved to be problematic for some of the drivers that complained of severe neck strain, with muscles being pulled in a fashion that they were not used to.  At the conclusion of the event, Nelson Piquet, who had just been crowned World Champion, collapsed from heat exhaustion after exiting his car.

F1 gave Caesar’s Palace another try in 1982 before abandoning the event.

It was in 1982 that The Detroit Grand Prix joined Long Beach and Caesar’s Palace on the calendar marking the first time that three Grands Prix had been held in the same country in one season. As the seminal home of the automotive industry in the United States, Detroit seemed like a good fit for a street race.

Set up around the Renaissance Center, the circuit looked appealing, but the track surface was far from forgiving. The track was narrow and bumpy, and even crossed over railroad tracks at one point. The surface was prone to crumbling, and the race was often a war of attrition for both man and machine. The FIA was unhappy with the temporary garage setup and pit lane, but a permanent garage structure was well out of the budget for the organizers.

Despite the issues, F1 stuck with Detroit for seven seasons, with it being the only US race on the schedule from 1985-1988.

The one-off Dallas Grand Prix in 1984 remains a curiosity in F1 history. Admittedly, whomever concocted the idea of racing in Texas in early July didn’t think this fully through. With ambient temperatures over 100°F, and track temperatures above 150°F the track began to break apart during the first practice session.

Attempts to repair the track with quick drying cement continued all weekend long, in a futile attempt to make the racing more palatable. With 90,000 tickets sold, cancelling the event was not an option, so the race went on as planned. 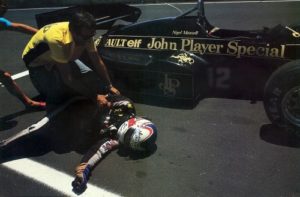 While Keke Rosberg took the win, the Dallas Grand is best remembered for the iconic image of Nigel Mansell and his car expiring within sight of the checkers. Clad in a black driver’s suit, he made the curious decision to hop out of the car, and push it to the line. Within a few moments, he collapsed from heat exhaustion, and flopped to the ground like a rag doll.

In 1989, Formula One debuted on the streets of Phoenix, as Detroit was added to the CART schedule. With Phoenix taking over the June date vacated by Detroit, the desert temperatures once again proved to be problematic, and many of the locals ignored the race.

The Grand Prix was moved to March for the following season and the race ran two more times. Following the 1991 event, FISA voted to cancel the contract for the Grand Prix, drawing the ire of the city, that had already invested 1.3 million USD in preparation for the 1992 race.

Formula One would run without a presence in the United States for nearly a decade. During that time, the face of American racing was changing. The CART Series was booming, having picked up many of the vacated F1 events. At the same time, NASCAR’s Stock Car series was quickly transitioning from a regional series into a national empire.

When US open wheel racing split ranks between CART and the fledgling Indy Racing League, NASCAR was the benefactor as Formula One seemed to fade out of the popular consciousness in America.

It was, in fact, the architect behind the open wheel split, Tony George, who was instrumental in bringing Formula One back to the U.S. George, who was chairman of the Indianapolis Motor Speedway at the time, spend a considerable sum of money to build an infield road course at the Speedway to host the United States Grand Prix.

The event debuted in 2000, with a crowd estimated at 225,000. While later editions of the event did not quite match this number, the event was still considered successful, but was not a money-maker considering the costs of staging the race.

Either way, it validated the Speedway’s nickname of ‘Racing Capital of the World’ playing host to Formula One, the IndyCar Series, and NASCAR in the same season: the only facility to do so.

Bernie Ecclestone, then CEO of the Formula One Group, however, had no love for the Speedway, Tony George, or the city of Indianapolis.

While the teams and drivers genuinely enjoyed the race and atmosphere at the Brickyard, Ecclestone was critical of the event. He referred to the local fans as ‘hokie’ and even refused to stay in the city during the race weekend. He booked his accommodations in Cincinnati, stating that Indianapolis “does not even have a proper five-star hotel that’s fit to stay in.” 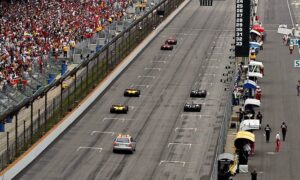 The Grand Prix at Indianapolis was dealt a blow in 2005 with a controversy involving cars running Michelin tires. On the formation lap, the Michelin-shod cars, 14 of the 20 starters, pulled into the pits, leaving the race to be contested with only six cars.

This black-eye inflicted on the event, along with the money lost in ticket refunds, put the future of the race in doubt. The Grand Prix ran again in 2006 without controversy, albeit to a much smaller crowd. 2007 marked the final Grand Prix at Indianapolis as Formula One disappeared from the United States once again.

As ideas were floated about a Grand Prix in the New York/New Jersey Metro area, the Circuit of the Americas was being constructed in Austin, Texas with its sights on Formula One. With a purpose-built racing facility complying to all of the FIA regulations and standards, COTA was awarded a ten-year contract to host Formula One beginning in 2012.

The race weekend has seen its ups and downs over the years, including a dip in attendance in 2015 with heavy rains due to Hurricane Patricia, a decrease in funding from the State, and a forced cancellation in 2020 during the Covid-19 pandemic. Overall, the event has been a success, producing massive numbers in 2021, and looks to remain on the F1 calendar for the foreseeable future.

What remains to be seen is whether or not the two recently announced temporary circuits in Miami and Las Vegas can prove to be sustainable events going forward.