There were a couple sad moments in today’s race. Robin Miller once again did an amazing tribute piece. This time for Bob Jenkins. I’m a huge Bob Jenkins fan so of course I shed a few tears but even if you weren’t a fan it’s hard to not get emotional during one of Robin’s pieces. Robin is fighting his own cancer battle so while listening to him speak on Bob Jenkins I couldn’t help but wonder who would do the piece on Robin. I’m praying for a miracle and that we won’t find out the answer for that for quite a while. 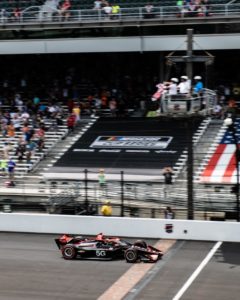 Not nearly as sad for all of you but not fun for me was that I wasn’t in attendance at today’s race. Many of you know my tradition is to watch the Indianapolis 500 from home. I’ve only attended twice. However, the GP of Indy is a different story and I had planned to attend everyone of them making that a tradition with my sons. We began our trips to Indy with qualifying but in 2014 the boys decided they rather see a race than qualifying for the 500. We began a tradition and changed up the way we do Mother’s Day. We’ve enjoyed this from 2014-2019. Of course 2020 did not happen on schedule and then fans weren’t allowed at the GP of Indy on the Fourth of July 2020. We did attend the double header Harvest GP in October at the speedway. In 2021 we returned to the GP although sadly it was the weekend after Mother’s Day. So the race that took place today at Indy is the first one we missed where fans were allowed. Honestly, I was afraid the heat might be too much so we didn’t make a huge effort to attend. It was also the first week of school for Zach and we will be at Gateway, so not to make excuses but there was just a lot going on. I’m crushed we weren’t there. What a fun race.

We have watched Will Power win this race again and again. He won in 2015, 2017, 2018, and the Harvest GP in 2020. He won again today! The IndyCars have raced here 11 times now. Will Power has won five of those 11 wins. Simon Pagenaud has won three, Rinus VeeKay, Scott Dixon and Josef Newgarden have each won one. It’s safe to say Power has dominated this track. I’ve laughed saying I’ve seen this race before after a Power win but that was not the feel today. Maybe because I watched from home and saw all the drama deep in the field, maybe because Power was not on the pole and had to gain that position or maybe because Power has not won yet this year, this race I was rooting for Power. Oh and he was my fantasy pick so maybe that’s why. Let’s point out a couple highlights or fun facts from the race. 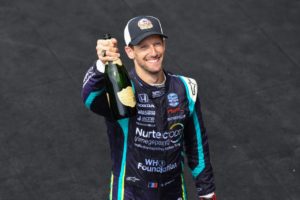 Romain Grosjean finished second. He was also second on this course in May. Safe to say he has the track figured out. Could he get his win here next May?

Will Power as we said has won here more than any other driver. He has also led more laps than anyone. Power has led 341 laps on the road course. Simon Pagenaud is second with 75 laps and Scott Dixon takes the third spot with 69 laps. Quite impressive.

Rookie Christian Lundgaard qualified second and was fast in practice. He was in the mix during the race and finished a respectable 12th. Based on this race alone Rahal Letterman Lanigan Racing definitely needs to consider this young man for a seat next year.

Alexander Rossi had his best finish for the year but it’s still no where near the season we expected from him.

Graham Rahal always appears in the mix during a race. If he can ever figure out qualifying he would be able to win. Sadly, he usually qualifies in the back half of the field and can’t make it all the way to the front. I’d be interested to see who has moved up the most spots this year. Im guessing Graham is near the top of that list.

Alex Palou, championship leader, had a disappointing race. He lost his engine on lap 67, bringing out the first yellow of the race. He still leads in points but Pato O’Ward has closed the gap to 21 points. Four races remain.

James Hinchcliffe, who was on the podium in Nashville, finished 22nd in Indy. That will not help his chances of staying with Andretti. He is a talented driver but needs to show it on the track.

On the home front

Things have been busy here this week with school starting. Zach started his Junior year. We will be traveling to St. Louis this weekend for the Bommarito Automotive Group 500 at Worldwide Technology Raceway, I still call it Gateway . This is always a fun race. Romain Grosjean will be making his oval debut. Tony Kanaan will be back in the 48 Ganassi car.

It took me so long to get this post out we also learned that IndyCar will be returning to Iowa Speedway in 2022. The doubleheader will take place on July 23&24. I am excited to have Iowa back on the schedule. Hope I get to attend in 2022. Look for a post early next week to hear all about our adventures in St. Louis and at WWT Raceway where we enjoy our final oval of the season. There is nothing like a night race under the lights.