Back to the Beach: LBGP Returns to its Traditional Date

The stars and cars of the NTT INDYCAR SERIES will make their appearance in Long Beach, California this coming weekend, continuing a history of racing at the beach that dates back to 1975. As the longest running street race in North America the Grand Prix of Long Beach began as an F5000 race and then went through periods of hosting Formula One, the CART Series and ChampCar. The race has been a regular stop for the current Indycar series since 2009.

The streak of consecutive races was broken at 45 in 2020 when the event was cancelled in light of the Coronavirus pandemic. In 2021 the race was held late in the season on September 26. The only other time the race was held outside of early Spring was the F500 race in 1975 which was also held in September.

For 2022 everything seems to be back to normal with the Spring date intact. Fans will also be pleased to hear that the State of California lifted vaccination requirements and mask protocols on April 1 for large outdoor events. Of course, those that choose to wear a mask are encouraged to do so, but they are not required.

The Long Beach street circuit has undergone a number of changes since its introduction in 1975. The current version has been in place since 2000 and measures 1.968 miles around with twelve turns. The circuit features two long straightaways with the front stretch being a long sweeping run down East Shoreline drive. The back stretch runs down Seaside Way heading into a three turn complex that culminates in a first gear hairpin.

The nature of the circuit provides a number of overtaking opportunities, however, the narrow racing line and concrete barriers requires discipline, patience and precision to make a pass stick. In its long history, Long Beach has produced some of the finest drives in racing. 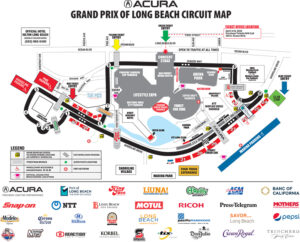 The city of Long Beach is located on the Pacific Coast of Southern California, on the border of Los Angeles County and Orange county. Located within the grounds is the Long Beach Convention Center that holds a number of racing-related displays and a family fun zone for the weekend. The event is held with a street-festival like atmosphere, and you will see a number of Hollywood celebrities, well-known athletes and other notable personalities milling about all weekend.

The undisputed King of the Beach is Al Unser Jr with six wins between 1988 and 1995. Mario Andretti and Paul Tracy have four wins apiece and Sebastien Bourdais has three. Of the current field, both Alexander Rossi and Will Power have two wins apiece and will be looking to add a third. The defending race champion is Colton Herta, who has proven his worth on these type of circuits and must be counted amongst the favorites. Other former Long Beach winners in the field include Takuma Sato, Helio Castroneves, Simon Pagenaud, and Scott Dixon. With the competitive nature of the series, picking a winner is a daunting task. However, its hard not to look past Team Penske. After two uncharacteristic mediocre seasons, they have come out of the box strong in 2022 winning the first two rounds. Josef Newgarden will be looking to add a LBGP win to his resume while Scott McLaughlin will be looking to stretch his points lead. Will Power, meanwhile, remains a threat to win at nearly every track on the calendar.

Beyond the Team Penske stable, there are a number of drivers that could give them a run for their money on Sunday as 26 cars will make up the grid.

The event features support races from IMSA, Super Drift, the Porsche Carrera Cup and the Stadium Super Trucks. A family fun zone, exotic car show, lifestyle expo and a concert from The Royal Machines round out an action packed weekend.

Practice and qualifying will be streamed live on Peacock, and the race will be broadcast on NBC at #:00 pm EST. Tickets are available here.