And so it begins again. 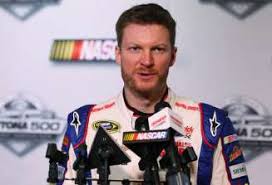 Dale Earnhardt Jr. placed second in the opening race of the 2013 season, the Daytona 500. He’s “supposed” to do well there as he “does well at restrictor plate races”.

For every positive somebody utters about Earnhardt Jr. there is a negative that accompanies. Even after making the 2012 Chase and being competitive until a concussion knocked him out of contention with six races to go, the nay-sayers were loud and critical. But that’s par for the course. 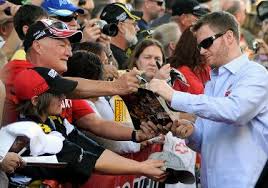 The negative comments that surround Earnhardt Jr. do not seem to affect him in the least. His legion of fans, team support, and place in NASCAR’s history keep him focused on the here and now.

First, it is important to note Earnhardt Jr. obviously has a strong connection, chemistry, and/or synergy with his crew chief Steve Letarte. Since being coupled together as driver/crew chief the pair has had solid results for the No. 88 Chevrolet Hendrick Motor Sports team.

Already the pairing is starting strong in 2013.

Earnhardt Jr. is in his 15th NASCAR Sprint Cup Series season this year. He is driving for arguably the best team in NASCAR, HMS. Earnhardt Jr. is the NMPA Most Popular Driver for 10 consecutive years, an honor he shares only with Bill Elliot.

JR Motorsports is run by Earnhardt Jr., his sister Kelley, and Rick Hendrick. The team fields cars in the NASCAR Nationwide Series (NNS).

The No. 5 is piloted by Kasey Kahne and USAC driver Brad Sweet. And this week, in Phoenix, five-time NASCAR Sprint Cup champion Jimmie Johnson will take the wheel of the No. 5.

The No. 7 car, driven by Danica Patrick last year, is being run by Regan Smith this season. Smith was tapped to cover Earnhardt Jr.’s two races missed last fall in Cup due to his concussion.

Finally the No. 88 car will run an abbreviated season this year with Earnhardt Jr. behind the wheel.

In addition to the Nationwide teams JRM runs, it also fields two Late Model teams in the NASCAR All-American Series and a team in the Mini Outlaw Series.

It wouldn’t surprise me if Earnhardt Jr.’s legacy will be one of extraordinary team owner in NASCAR. Earnhardt Jr. has an eye for talent, a gift for team management, and, perhaps most importantly in racing, deep pockets with a name that sponsors like to be associated.

Earnhardt Jr.’s place as a driver is already solidified with two Nationwide back-to-back championships in 1998 and 1999 and 19 career Cup wins and counting. Earnhardt Jr.’s 19 Cup wins place him on the all-time wins list with names like Kevin Harvick, Carl Edwards, Davey Allison, Fonty Flock, and Buddy Baker. Of course, he could earn more as this 2013 season unfolds and beyond.

Earnhardt Jr. had this to say upon earning his second in the season opener,

“I think it’s important to get a good start points wise. It’s important to put a good foundation together. If you get behind early, it seems like you’re still chasing that Chase (for the NASCAR Sprint Cup) spot at Richmond (Va.). It’s good to get a good start, get a couple points on some guys. We’re a good team. Hopefully we can keep the pressure on them and stay up in the top five in the points and win some races. I want to win some more races this year. That’s our focus.”

Fans not only get to enjoy Earnhardt Jr.’s racing career at the Cup level, but witness his efforts in the Nationwide Series as both owner and driver. He seems totally ensconced in NASCAR at this point in his career.

After his second at the Daytona 500 Earnhardt Jr. seems quite optimistic for 2013 which is a wonderful sign for him, his team, and his Nation of fans.